Brecon Jazz Club member and supporter of Brecon Jazz Festival, Jonathan Morgan, has donated two oil paintings on canvas by Diana Golledge to Y Gaer for public display in Brecon. One is of American saxophonist Benny Carter and the other is of a French jazz trio featuring Stephane Grapelli on violin, Marc Fosset on guitar and Jean Phillipe Verdin on double bass. The paintings, along with two other paintings, were originally bought by the late Bernard Glanville in 1995. His nephew Dave Coombe, who lives in Brecon, kindly donated them to Lynne and Roger of Brecon Jazz Club at the launch party for the 2017 Festival so they could sell them to help raise money for the Festival. However, Brecon Jazz Club wanted to ensure that they would go to buyers who “respected the legacy of Brecon Jazz” and they hoped they would, if possible, be in the public domain, hence Jonathan’s generous donation to Y Gaer after purchasing three of the paintings, one of which he will keep for himself to give as a gift to a family member. It is hoped that the paintings will be unveiled in a ceremony at the newly refurbished museum and art gallery in Brecon to coincide with the launch of Brecon Jazz Festival 2019.

Jazz concert in the cathedral 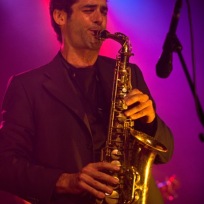 Music on the streets 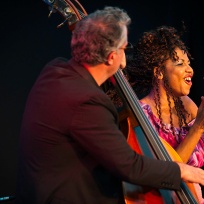